On 12-1-2021, Tak.gov hosted a conference that included a presentation by Jason Regnier, Technical Director of the IVAS program. While his actual presentation was short, the questions asked by the audience resulted in some very interesting information being revealed on the status of the display, user feedback, and the program overall.

At around @6:12, Regnier describes the IVAS OS as "not android, sort of a windows" system, and describes how they are unable to run either Wintak or Atak natively on it- he states that is more a version of ATAK designed to run on the Hololens. It is probable that IVAS runs on a variation of Windows Holographic that the Hololens 2 uses.

@14:00, Reginer states that units will be fielded either IVAS or Nett Warrior, not a mix. However, he claims both are interoperable with the same TAK data and that Nett Warrior has now been moved under PM IVAS, with both systems using the same batteries and cables. He presumes that Nett Warrior will be moved to more rear echelon units as IVAS is fielded to frontline units.

@16:00, Regnier states that they plan to implement all TAK symbology into IVAS, with the only thing 'not being done yet' being the 'chemlight' process, which are placeable markers. He also states that other TAK tools like measurement are almost all integrated. He states that the goal is to make the system as close to ATAK as possible.

@18:00, Reginer states that they are not using eyetracking for controlling IVAS: all of the controls are done through the buttons on the Puck, which he states are working very well, with quick messages and functions. He claims that a soldier was able to set up an entire TAK mission with the puck controls, but it was tedious. The intention is to use Wintak to plan objectives like that.

@19:00, Reginer goes into the Puck controller- he is not sure of the processor, but it is probably some sort of System-on-chip like those onboard the Hololens 2.

@20:00- Reginer says they are planning on releasing an IVAS development kit so creators can create apps for IVAS. He says they 'believe what they have done is backwards compatible with the Hololens 2" and says if Microsoft puts out a commercial "Hololens 3" that does the same processing, which they are pushing for, developers should be able to use that to create software for IVAS.

@22:10, Reginer states that IVAS meets all light security requirements and is passing the test against aided and nonaided vision which is 'required for it to be fielded."

@22:40, Reginer talks about daylight performance, which is a sticking point for the base Hololens 2. They were required to run in daylight and did not meet that in CS3, but are now able to with CS4, taking 'several stages' to get to the required brightness levels. He claims the brightness is now at a level that all AR functions including virtual enemies function in full sunlight. He says it was very difficult to get to this point, and it 'took a long time!"

Number 1 was navigation speed: soldiers were able to run through navigation courses very quickly with IVAS versus map and compass. (This isn't surprising- a better comparison would be IVAS vs Nett Warrior EUDs and I don't really know why they're comparing it to paper map landnav). They liked the TAK data, the wide FOV and the rapid targeting systems with the FWS-I. They were also positive on the thermal-night vision fusion.

Negative feedback came on the Puck-to-HUD cable. Reginer states that they are working on ways to better secure it.

@27:00, Reginer states that his "number 1 concern as Tech Director" was that under exertion the goggles would fog up and the soldiers would take them off. "Much to his surprise", commercial anti-fog coatings worked very well. He says they had "200 soldiers at a time , in 95 degrees, 100% humidity" with no goggle fogging.

@ 28:20, Reginer states that while he did not think IVAS would pass on CBRN integration, in testing at Ft Bragg with a squad in MOPP 4 they found that IVAS actually works 'incredibly well' with gas masks and the MOPP system. He states that they were able to see it just fine through MOPP gear and the users liked the performance.

@29:31, Regnier states that while the system will not be cleared for parachute drops and must be taken off, it is good for air assault.

@30:00, Reginer states that while they have only been able to demonstrate Battle Drill 6 (indoor, enter and clear a building) so far, the primary restriction on working on the other battle drills was the outdoor performance of the display of the older systems. He says that now they have the brighter display, that the other PMs (probably SiVT) will be working on implementing the other Battle Drills, as before it was impossible to do anything outside anyways.

@31:30, Reginer goes into IVAS advantages over traditional image intensification systems in terms of parallax. He stays that because the IVAS sensors being 'so much closer to your face' that parallax and stereo vision are better than traditioal. Additionally, he says that IVAS implements software parallax correction, which other systems do not have. He says it's "pretty good". He says the thermal is good, but it is just a single camera so depth perception is lost.

@34:20, Reginer states that they were aware of display issues going into testing, but they 'were not sure just how bad it was'. He says there were 'dark spots' in the display and they were too much, resulting in them halting the test. Microsoft redesigned the waveguides but it took 8 months. FOV was moved from 80deg to 70. He says that they have a prototype of the new system in that has a much more uniform display. He says that they went to field testing because they believed that only soldier testing would confirm the issue.

@36:00 Reginer states that they have no plans to move to a wireless headset connector, as there is just 'a lot of information that has to come down' and power has to be run to the headset via cable anyways.

@37:15 Reginer explains that they are an ITAR-restricted program (as in, they need a waiver for export as they count as arms, but aren't restricted like stealth tech), and they are preparing for Foreign Military Sales to allies.

@38:20, Reginer states that the SLAM system of IVAS works in bright sunlight and at night. (I am interested in how it does this- Hololens 2 uses grayscale visible light cameras and cannot function in the dark, but IVAS seemingly has no issues doing so.)

This update quashed a good amount of the bad news and doubt I've heard about the performance of IVAS. I've heard that it has poor light security, is impossible to use in the day, and cannot be used with CBRN equipment. I've heard it'll fog up instantly under exertion and that the parallax of the display will disorient soldiers. I don't think it is proper to take early failures and issues as total damnation for a program as rapidly developed as IVAS has been and I am confident it will become a gamechanging system for the dismounted force.

Haha that's so funny, you should send me all the DoD powerpoints sometime

Mail them to therealrickyj@outlook.com please

On 12-1-2021, Tak.gov hosted a conference that included a presentation by Jason Regnier, Technical Director of the IVAS program. While ... 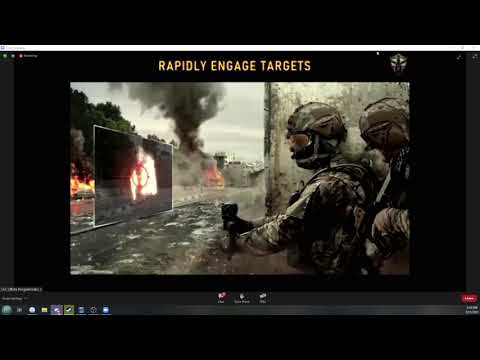